Bandhani-tie and dye is the most important traditional handiwork of Kutchi people. Bandhanis are very closely associated with deep rooted social customs. It is treated as a symbol of married life. It is a must in the marriages of Hindus and Muslims. Discovery of dyed cotton fabric dating back to the Indus valley civilization shows that the art of dyeing using penetrating was well known to the dyers about 5000 years ago. Tie-dye still continues to have an important position in Gujarat. 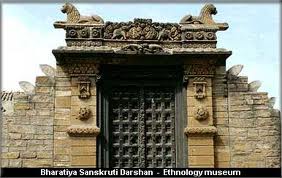 Bandhani tie and dye is found in some forms in almost all parts of the world. ‘Bandhani’ is also called as ‘Bandhej’ came originally from the word ‘Bandhana’ (to tie). Today, most of the Bandhani produced in India is made in Kutch, Saurastra and in other neighbouring districts.

The process of tie-dye is relatively simple, but it is very difficult and time consuming. The material to be used is folded more than a few times until reduced to a square or rectangular piece. It is spread on wooden table and desired designs are marked on it with a wooden block (An even nail block) using ‘Gheru’ (Red oxide) mixed with water. Then, it is taken off the table given to a Bandhani craftsperson, who purposely allows the thumb and the finger nail to grow long so as to use them as a pair of tongs for trying the marked portions into tiny knots. The decorative designs indicated by the block are sized and skillfully tied with thread thus retaining the original colour of the material in that portion. Then, it is dyed in a light colour generally yellow. The area requiring yellow is once again tied and later dyed in red or another required dark colour. Thus, the different colours required are introduced into the materials. After the process of tying and dyeing, the cloth is washed with soft water to remove the colour impurities. Then, to remove the colour knots, the process of hitching is done. Two ends of the cloth material are caught by two persons. It is a little hitched in the open air or in the sunlight so that the knots are automatically removed and the tied parts are free. The traditional motifs used are like Sikar, Kori, Badam, Champakali, Kharek etc. Bandhani is used in main products like sarees, Punjabi dresses, cloth, skirts and shawls etc. Tie-dye Odhanis are produced in cotton, silk and georgette. Mandvi, Bhuj, Khavda, Dhamanka, Tera, Bara and Anjar are main centres of tie-dye. According to the survey of tie-dyeing held in 1961, the completion of a piece of the ‘Bandhani’ takes almost eight hours. Red knots can also be removed or lightened or even eliminated by submerging the cloth in a solution of caustic soda and sodium hydrosulphite.

The finished piece is then washed and decent. Bandhani textiles are regularly sold still tied up so that the customer can be sure that it is not a printed artificial and perhaps also so that the customer can have pleasure of seeing the pattern exposed when the cloth which appears to be all in one colour after its final dyeing is pulled separately from its folds and the binding cotton falls away from the plane. While Chunari with a design made up of small dots is possibly the most attribute type of Indian tie dye material, the banded or zig zag ‘Laharia’ is also extensively seen in Kutch today. The method is equally one of enfold oppose but in this case the whole cloth is rotated up and tied at intervals to shape stripes. Only tremendous cloth, usually thin cotton of ‘malmal’ (Kutchi word) can be used for this process as the dye must go through the whole tightly rolled material. The cloth is rolled crossways from one corner to form a striped pattern or folded like a fan, usually in four to create a zigzag as in ‘Chunari’ dyeing, consecutive tied and engagement in dye baths produce a succession of colours. If the cloth is untied and re-rolled from the opposite diagonal, a checked effect results called ‘Mothara’.

The dyes of all types of Bandhani work used today are always artificial. The widespread dyes were originally thought from the ancestry of Morinda Cordifolia, in combination with an double sulphate of Aluminium and Potassium caustic for the fast (Pakka) red, Kasum from the petals of sunflowers, Carthamus Tintorius for Kutch red, Haldi from the tuber of Curcuma Domestica with Chhach for yellow and Gali, Indigo from the leaves of Indigofera Tintria for blue. Their financial records of sloping sharply with the cloths of difference of several days and strong with the simple summary are required for chemical dyes to create the result. The difficult work of collecting the dye plants and obtaining their dyes are not referenced by either of 19th Century writers but it is hardly surprising that current dyers enthusiastically took up the opportunely tinned colours that took their place.

Bandhani is done with cotton, gajji silk, fur, muslin etc. in Gujarat. The smooth weave known as gajji which was used for more costly Bandhani textiles up to the early 20th Century gives richness to the delicately worked designs which are distinctive of Gujarati tie and dye skills.

Although the impressive silk sarees and odhanis decorated with peacocks, flowers, dances or a ‘Rasamandala, designs used as cheerful dress. The high-quality kind of bandhani in Gujarat is most recurrently made not of silk but of cotton. It is popular as ‘Gharcholu’, the traditional wedding ‘Odhani’ of the Hindus bride now also legally taken by Jain women and even worn as sarees by guests at weddings. The fine cotton is divided into separated by the partitions by natural fiber stripes of gold brocade, the gold checkered fabric being made in Porbandar, although it was formerly imported from Varanasi. The most important ‘gharcholu’ design are called ‘Bar Bhag’ (12 sections) of ‘Bavan Bhag’ (52 sections) controlling on the number of decorative designs and squares. To save cost, the designs may be tie-dyed into a plain red cotton cloth without the gold rich fabric woven. The buyers having enough money for the zari chowk Saree is more attractive. Another negotiation can be achieved by stitching gold ribbon in strips on the tie dyed Sari, yet another step down the steps of traditional methods is taken when the design itself is roller printed.

The ‘Gharcholu’ designs are given to a girl by her husband at the time of their wedding. She usually arranges it over her head. It is exclusively covered during the ceremony, while she wears under the traditional white silk saree called ‘Panetar’ with a red border.

According to the survey, more complicated designs in Bandhanis are finished in villages of Kutch. Many of them are sent to Jamnagar for dyeing and advertising. As stated in the survey of 1961, there were about 4000 people functioning in the tie-dye industry in Kutch mostly in Bhuj and Anjar. The leading persons in Kutch are ‘Khatris’ who have expended a effective monopoly on textile production since middle aged times. It is said that the Khatris have been came from Sind.

The tie-dyed silk fabrics worn by the Khatri Muslims are completely different from the Hindus. The Hindus and the Muslims country communities normally make extensive use of Bandhani textiles, both as ‘Chunaris’ and ‘skirts’. Their fairly basic linear designs are originally from Sind. The waterless areas of Northen Kutch and Banni are just like deserts and many communities describe their origins to Sind. Complex embroidered patterns are often added over the basic tie dye fabric and a practice is also seen in more difficult level both in designs and techniques among the Khatri Muslims.