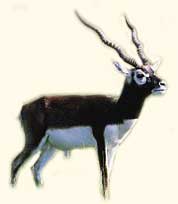 This variety of deer is to be seen occasionally on alluvial sands along the shores of the Gulf of Kutch, while the Common Red Antelope-Gaz:ella henetUi ( Chinkara ) is found in the same places in much larger numbers. A fine male antelope of the Indian plains has long spiral horns. The older animal becomes deep black on the upper parts, in strong contrast with its white throat, belly and legs. Sought after by sportsmen and some of the villagers, its number which was once a justifiable pride of Kutch, has sadly diminished today. Bucks were plentiful on the low lying saline flats of Banni which provide grazing for the cattle raised in this area. Bucks need to be carefully husbanded so that their number can once again be an attraction to the tourists. Black bucks can run very fast and escape enemy by swift running. 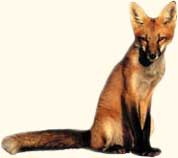 Three varieties found in Kutch are (i) common grey Indian fox ; (ii) white with black belly and legs, and (iii) large English-like fox of a light brown colour with a white point to his brush. Known as lonkadi it is quite active. This animal is normally found in burrows in fields and open lands. In Kutch it is common in the shrubby open lands but not in the desert. It lives on frogs, reptiles, birds, insects, etc., also feeds on fallen fruits and berries and is a menace to melon plantations. These animals have notable speed which helps them in their defence against other animals. 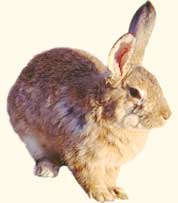 The Indian hare is an animal of open fields and plains. It prefers busy tracts alternating with cultivation. It is usually nocturnal in habit. By day, it lies up in a scooped out hollow or ‘ form ‘ made in the patch of grass. In this respect, it differs i from the true rabbit which lives in a burrow and does not occur in India. This animal’ is a great menace to cultivation. Reduced by snaring and shooting, I the greatest cause for the decline in its population has been the destruction j of plant cover, which is still untouched in the southern fringes of the Banni..

The striped hyaena though not much of a common wild animal of Kutch, one does come across it in the shrubby semi-desert areas.

The adaptable jackal is common everywhere. The long-drawn eerie howling of this ubiquitous canine is a very familiar nocturnal sound heard in the countryside. It mostly feeds on carrion and is a useful scavenger. Occasionally, it lifts poultry and young ones of goats and sheep. It also raids sugar-cane fields and melon patches in season.

This species used to be fairly common but of late its numbers have dwindled considerably. Unlike the tiger which prefers heavy cover, the panther is able to live and thrive almost anywhere. In Kutch they have good and plentiful cover among the rocky hills, and except after killing a cow or goat, are difficult to trace. Its natural prey includes deer, monkeys, porcupines, etc. A panther living near human habitation preys mainly on domestic animals or even poultry and is particularly fond of lifting dogs. It invariably seizes its victim by the threat and kills it by strangulation. The Indian leopard Panthera pardus which was quite numerous but is now not so common in the various “rakhals” on the Kutch mainland. 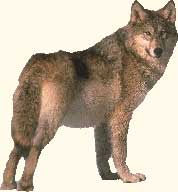 Normally wolves are found in forests but they are known to inhabit desert and shrubby lands also. Generally they prey upon stray animals in open uninhabited areas but when driven by hunger, they even kill children and become a menace to human life. 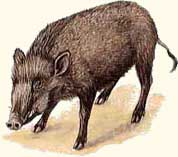 Wild boars were plentiful in the past and even today they are quite apparent on the Kala Dungar in Pachham, but elsewhere they are not as numerous as might be expected. This highly prolific species is very destructive to crops. It commonly grubs for underground roots and tubers but is omnivorous and also feeds on insects, snakes and carrion.